The Dead and the Dying

"The Dead and the Dying" is the ninth episode of Spartacus: War of the Damned. It is the thirty-eighth episode of the Spartacus series overall.

Crassus learns that a fellow prominent Roman is attempting to steal the glory of defeating Spartacus. Spartacus looks for a bargaining chip he can use against the Romans.

Spartacus attacks a small group of Roman soldiers and once they are dead, he realizes they are not Crassus's men as Crassus' men have a Bull symbol and these men have a different symbol. Laeta confirms they are commanded by Gnaeus Pompeius Magnus - Rome's greatest warrior because of their dolphin and eagle symbol. Nasir then tells Spartacus a rider approaches. At first they think it is a Roman, but as they look more closely they realize it is Naevia, who is holding Crixus' severed head. She later tells Spartacus that the days after they parted were full of victory, until confronted with Crassus and his men. The reason she was left to live was to taunt Spartacus with the vision of his end.

Spartacus then sends some of his men to Crassus' camp, posing as Gnaeus Pompeius Magnus' soldiers in order

to lure him and some of his men to meet with them. Caesar seemingly recognizes the rebels, but decides to stay silent. He then suggests sending Tiberius.

On arrival at the camp, Tiberius and his men go to meet with Pompeii before they realize its Spartacus who remarks on it being a different Crassus he met. Tiberius and his men are captured, as Spartacus recognizes Tiberius' sword and asks him if it was the one that killed Crixus. Spartacus tells Gannicus that he has decided decides not to kill the romans but capture them in a night of gladiator games, as a tribute to the fallen rebels. He then uses the sword to knock out Tiberius.

In the Roman camp, there are still survivors from Crixus' last battle, now prisoners; including Agron who survived his wound inflicted by Tiberius. Agron is beaten for not giving information about the location of the rebel army. When Caesar aproaches, the German tries to get up but is punched by a Roman and Caesar tells Crassus that he was a rebel high standing with Spartacus while Crixus and Gannicus were equals in strength. Crassus commands him to be nailed to a cross as a warning, with Caesar helping in the act. When Crassus learns of his son's capture by a messenger, he sends Caesar to offer a trade: the 500 survivors for Tiberius' life.

At the rebel camp, the rebels are preparing for the games while Spartacus informs Naevia about the games to honor Crixus. She is not sure to partake but he gives her the sword Crixus wielded and was killed by, as she reflects on his killer. Spartacus tells her it was Tiberius, who is Crassus' son and he is held captive with the soldiers and ready for her to personally kill. Now given a chance at revenge, Naevia agrees to partake in the games while using the sword of her lover to honor the fallen.

Meanwhile, a chained Tiberius is bemoaning his situation before Kore visits him and taunts him about how bad it feels to be in chains. He states she was never chained but she states was condemned to his whims. Tiberius replies that he would return her to his father if she set him free, since Crassus still loves her. She says she had not dared hope for such a thing and thanks him as she tells him she will return at nightfall. Tiberius is hopeful but Kore tells him that she will return to see his death, a thing she longs for, having seen through his manipulations.

Spartacus is the first to fight, and his first opponent is one of Tiberius' bodyguards. He seems more capable then the other captured Romans, but when Spartacus faces the crowd, the soldier tosses his sword to the ground. Sharing a look with Tiberius, he firmly shouts, "I am a Roman! I will not fight for your fucking entertainment!" before Spartacus swiftly cuts his throat, warning Tiberius and the other Romans to fight or die where they stand. He orders two to face him next, and expectedly fends them off easily enough, until one of them manages to inflict a small wound across his face. They continue fighting for a short while, until Spartacus buries his swords on the

ground in an X shape. He then fights them unarmed, but proves very proficient with the use of his fists, and is able to dodge, hit, and grapple very effectively. Spartacus takes the combatant wearing chainmail by the head, and slams him between the buried swords, slitting his throat and killing him swiftly. Spartacus quickly disarms the remaining Roman, who then attempts to strike him using his own fists, which proves incredibly futile. Spartacus reclaims his swords, stands behind the injured and exhausted Roman, and kicks him. He then jumps up into the air and drives the swords through his eyes, killing him and drawing forth a huge roar from the rebels. Gannicus is called out by Spartacus, who claims that two Romans is not enough. He orders three to fight him. During the fight, as Spartacus returns to his seat next to Laeta, she says that Gannicus seeks to best him. He replies with, "Gladiators seek to best all, it is how they survive." Gannicus is seemingly outmatched when t

he three Romans corner him to the edge of the cliff; though this may just be for show, it still creates concern in Sibyl's eyes. He grabs hold of a spear, and performs an incredible leap to get him out of the corner. Spartacus compliments Gannicus on how he is the only one of the gladiators to win his freedom upon the sands; Laeta questions why Gannicus fights for the rebels if he was freed, and Spartacus says he did it to honor a fallen brother Oenomaus, and says it is the bond that joins all men in such pursuit. Gannicus  launches a kick into his opponents, knocking a Roman off the cliff. He then easily impales another through the stomach, and leaves but one, who is injured from Gannicus slicing his leg. Laeta looks disturbed, and Spartacus questions this. Laeta states that they are no longer her people. She does not like the gory sights, but revels in its meaning. Gannicus decapitates the Roman and tosses his head into the crowd. Saxa, Lugo and Nasir are among the rebels to fight the rest of the captured Romans, and they have no problem with killing them all. Rabanus and Pollux, two former Gladiators from The House of Batiatus, are also given a match to fight. When all the Roman soldiers have been slain, signaling Tiberius' turn, Naevia has the honor of fighting

him. However, during the fight, Caesar arrives to offer the trade; Spartacus is first hesitant but finally agrees to it. Just before she tries to behead Tiberius, Spartacus stops Naevia and tells her of the trade, telling her that it is her choice. She lets Tiberius live, but tells him she will have his life someday.

When an injured Tiberius hobbles towards an amused Caesar, Kore runs at him in anger to claim her vengeance and kills Tiberius by stabbing him in the back. Spartacus then tells her in anger that she has just taken 500 lives. She replies that Crassus will still make the trade, offering to go in Tiberius' place.

Tiberius' body is returned to a deeply saddened Crassus along with Kore. He tells Caesar they march for Spartacus to see him to deserved end. He then embraces Kore who refers to him as Marcus, but he corrects her saying that from now on she will address him as dominus.

, including Agron. That night Naevia burns Crixus' severed head to honor him and the dead. Each rebel calls out the name of those loved who have fallen, Sura, Varro, Mira, Diotimos, Oenomaus, Duro, Donar, Nemetes, Sanus, Barca, Rhaskos, Acer, Liscus, Fortis, Vitus, Tychos, Sophus, Mannus, and Plenus. Finally all chant Crixus. Spartacus declares that all those able, will make final stand against Rome, and promises they will live free or join their brothers in death.

Characters in Order of Appearance

The episode is based on a real event that took place in 72 BC. After Crixus had been defeated and killed by Consul Gellius Publicola in the region of Apulia, both he and another consul, Cornelius Lentulus, combined their forces and engaged Spartacus in open battle. Spartacus defeated their combined armies, and around 600 or more Roman legionaries were captured in the battle.

Whether for personal amusement or to honour Crixus, Spartacus forced the prisoners to face one another in gladiatorial combat, leading to around 300 or more matches taking place. News of Spartacus and his slave army forcing Roman legionaries; Roman citizens, to fight to the death in what was a slave sport would have been appalling to the Roman senate and would have added to Spartacus' infamy.

Spartacus: "The past is seldom as we would have it. The future, yet to be known. Embrace the present- and strike all else from concern."

"This night, hearts lift in joyous reunion with those thought lost to us. Fathers. Brothers and sisters. Sons and lovers. Hold them close for the shadow of Rome is upon us. We shall seek our destiny together - whatever the cost. Yet let us not pass from memory those left absent from our arms - those who sacrificed their lives so that all may live free."

"Split heavens with the sound of his name." "Let it carry to Crassus and Pompey, as distant thunder promising storm of blood." "All who are able, will make final stand against Rome." "And this I promise you, we will live free, or join our brothers in death." 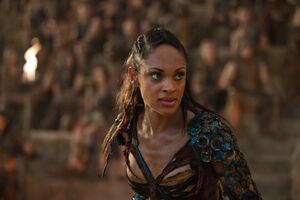 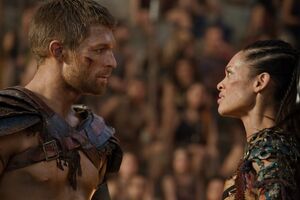 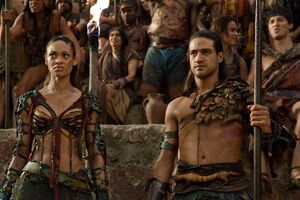 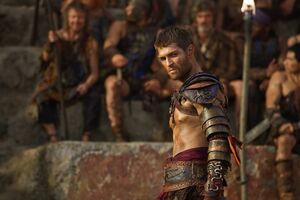 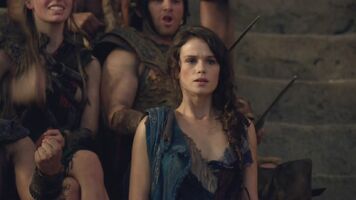