Back to page
Add topic

Use this page to discuss design and content changes to the main page. For general wiki discussion, please visit the Community Portal or Forums.

I'm thinking the main page may need some colour changes from the blue/pink scheme. Does anyone have any particular suggestions? Venus Aurea 19:59, October 9, 2010 (UTC)Venus Aurea

Hey there, just found this wiki and have contributed already. Im thinking that maybe red and tan (like blood and sand), or maybe red and black? just a suggestion....

Is there going to be a new series based on Caesar? 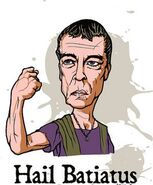 Hey my brothers and sisters.

I know this page is not so active as it was before Spartacus show ended, but I'm still totally in love with this show and I can't stop thinking about it. :D Now I can't decide who's the best gladiator. It's really hard. From these 5 (Agron, Oenomaus, Gannicus, Crixus and Spartacus).

I believe Spartacus is one of the best gladiators, but not the very best, probably Gannicus is. Crixus is the man I fell in love once I've seen him at the first time :D but still, I can't say he's the best, because he was too often kicked by his opponents such as Theokoles, Spartacus and even Gannicus would defead him in proper contest. Agron is good, but "only" the formidable warrior, not one of the best I think. Oenomaus is very good fighter/gladiator/warrior and doctore (I think he has only these titles :D), but he let The Egyptian to kick his ass and Gannicus in rage then easily defeated him, but Oenomaus in the arena before when facing Gannicus and other gladiators sometimes kept upper hand even in shackles and with stupid "stick sword".

So, probably I decided already, Gannicus is the best warrior. :)