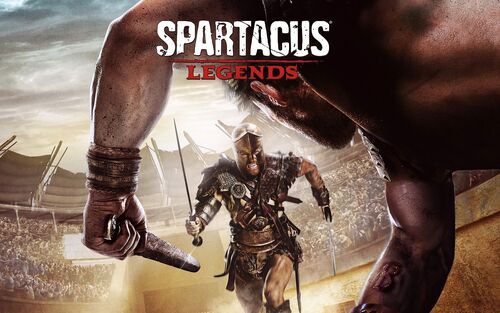 Spartacus: Legends is a fighting-style game. It was released on the PlayStation Network on June 6th 2013 (Algeria) and worldwide on Xbox Live Arcade on June 26th 2013. The game was developed by Kung Fu Factory and Published by Ubisoft. Spartacus Legends is free to play, but some in-game content can be bought using real currency.

The game takes place after the events of Vengeance, and perhaps after War of the Damned. The player buys the infamous Batiatus' Ludus and uses it to maintain a Ludus of their own.

The player takes on the role of a Lanista and one of their Gladiator’s in battle. The player must buy, train, and equip a "stable" of warriors and send them to the arena to fight other gladiators.

As the story progresses, the player can face stronger opponents and gain better rewards. The goal is to become as famous and prestigious as possible, while maintaining both a Ludus and its Gladiators.

Sword and Shield - A highly defensive style with medium range and power.(Murmillo, Thraex or Samnite). 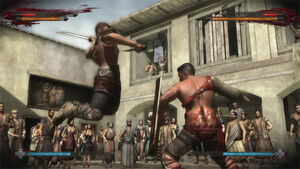 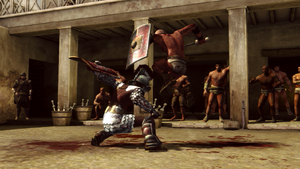 Trident - Longest range, but terrible up close. Is average with everything else. (Retiarius, without net).

Spear and Shield - Long range and quick with high defense, but power suffers. (Hoplomachus, without dagger).

Each time you kill an opponent you get a perk. Special opponents have more unique perks, while random opponents produce a more common, random perk. Perks have color classes like the gladiators and weapons have; grey, green and blue. These colors can only been viewed in the Ludus.

Replacing a perk with another perk cost gold, so picking perks carefully is important.

For a complete list of all perks see Spartacus Legends: Perks.

There are six arenas, each with their own gladiators and champions. The higher leveled areas come with higher risk and reward. Beating the Legendary Gladiator of an area makes him available for purchase in the Ludus. Each Legendary Gladiator's cost varies from seven gold and up. Two additional arenas are playable as of the latest update as well.

The first characters are the Bosses that are unlockable while playing the Primus fights.  They are as follows:

As you fight in the Primus and defeat all the six bosses, they reset with higher stats. The stats continue to raise higher and higher until you defeat them and cause it to reset them 4 times... after the 4th time you defeated them all, the stats on the bosses remain the same. You can fight and reset the Primus fights 7 times, then they will dissapear from the game and the challenges and online options in the various Arenas are then the only fights available.  The following is a listing of the stats for each of the bosses in the first 4 times of playing through the Primus': 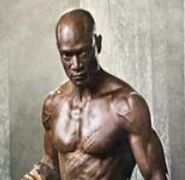 Current final recruitable Oenomaus is the same stats as #1

Current final recruitable Acolytus is the same stats as #1

Current final recruitable Ixion is the same stats as #1 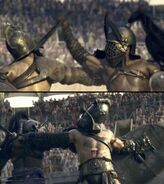 Current final recruitable Masonius is the same stats as #1

Current final recruitable Crixus is the same stats as #1 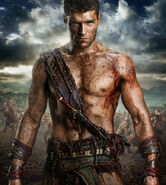 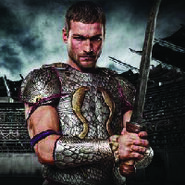 Current final recruitable Spartacus is the same stats as #1

You must defeat each of these bosses 6 times across all the districts, unlike the Primus Bosses though... these bosses can change fight styles that differ from thier final recruitable style and their stats are different then the final recruit version as well.  So far the Nemesis fights are all fought in the same district order:

Below is a list of all the released Nemesis bosses and their stats in each of their 6 fights: 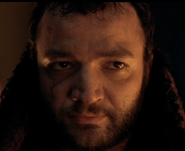 2. Any Style Vs. Dual Daggers

3. Any Style Vs. Dual Swords 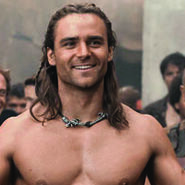 3. Any Style Vs. Two Handed Sword

5. Any Style Vs. Two Handed Sword

1. Any Style Vs. Dual Daggers

3. Any Style Vs. Two Handed Sword

Each of these bosses are made to be like one of the huge monster characters from the show, like Theokoles.  So far these are NOT unlockable in any way, but they include:

Other characters names are seen in the game, however, these are not based on the characters, and any resemblance is purely coincidental. 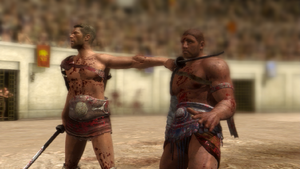 When a gladiator is purchased, he can be trained in one of eight fighting styles.[1] Once ready, he can be sent to face other players or computer opponents for rewards of gold, silver and fame.

If a Gladiator dies in battle, any weapons and armor will be returned, but any skills the Gladiator had goes with him. However, he may be revived at first for free and each consecutive time for more currency. If a legendary Gladiator dies, he is not given the option of revival, and instead must be purchased again.

As you gain more fame, you will level up and unlock new equipment, fighting arenas, challenges, and fighting styles. You may also gain fame and silver from online duels.

The unlockable legends from the show that you can purchase in the market  currently have the same stats as the version of them that you fight the first time in the Primus fights. They are priced as follows in the market:

The unlockable legends from the show in the Nemesis fights can be purchased in the market as well, they are all priced at 12 GOLD each.

For a list of the achievements see: Spartacus Legends: Achievements 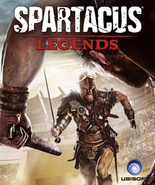