Spartacus: Blood and Sand is a Starz television series that premiered on January 22, 2010. The series focuses on the historical figure of Spartacus (played by Andy Whitfield), a Thracian gladiator who from 73 to 71 BC led a major slave uprising against the Roman Republic. Executive producers Steven S. DeKnight and Robert Tapert focused on structuring the events of Spartacus' obscure early life leading to the records of history.[1] The show has been rated TV-MA for graphic violence, strong sexual content, and coarse language.

On December 22, 2009, it was announced that the show was renewed for a second season before even premiering.[2] However, on March 9, 2010, IGN.com reported that the production of Season 2 has been delayed due to star Andy Whitfield being diagnosed with early-stage non-Hodgkin lymphoma.[3] According to the weekly New York magazine, due to the delay, Starz developed a six-episode prequel to Spartacus: Blood and Sand.[4]

It would later follow up with an official second season, Spartacus: Vengeance, following the role of Spartacus being granted to Liam McIntyre and premiered January 27, 2012.

Official Description of Spartacus: Blood and Sand From Starz[]

Betrayed by the Romans, forced into slavery, reborn as a Gladiator. The classic tale of the Republic's most infamous rebel comes alive in the graphic and visceral new series Spartacus: Blood and Sand. Torn from his homeland and the woman he loves, Spartacus is condemned to the brutal world of the arena where blood and death are primetime entertainment. But not all battles are fought upon the sands. Treachery, corruption, and the allure of sensual pleasures will constantly test Spartacus. To survive, he must become more than a man, more than a gladiator. He must become a legend.

The story begins with an unnamed Thracian’s involvement in the war against the Getae in Roman auxiliary under the command of the Legatus, Gaius Claudius Glaber. Glaber, persuaded by his wife Ilithyia to seek greater glory, instead decides to confront the forces of Mithradates. The Thracian, feeling betrayed, leads a mutiny against Glaber, and returns to find his village destroyed. The Thracian and his wife Sura are captured by Glaber the next day; the Thracian is condemned to die in the arena for inciting mass desertion of the auxiliary, and Sura is condemned to slavery. The Thracian is sentenced to death, and is forced to fight four gladiators. However, he manages to kill the gladiators, and Senator Albinius commutes the prisoner's punishment to slavery. Since the prisoner's true name is unknown, Batiatus suggests to Albinius to name him "Spartacus", because he fought like the ferocious Thracian king of that name.

Seeing the Thracian's skill and popularity with the crowd, Lentulus Batiatus purchases him for training in his ludus' in Capua. Spartacus joins Batiatus’ gladiators under the tutelage of Doctore, a former gladiator but fellow slave. He is befriended by Varro, a Roman who sold himself into slavery in order to pay his debts and support his family. However, he is harassed by more senior gladiators, notably Crixus, an undefeated Gaul, and Barca, a Carthaginian. Soon, Spartacus learns that Sura was sold to a Syrian slave trader. Batiatus, who has been unable to control Spartacus during his first days of training, discovers the instrument of his taming, and persuades Spartacus to fight for his and Sura's freedom.

Spartacus' gladiatorial career is soaring but he is heartbroken when Sura is delivered to him mortally wounded, which is unbeknownst to him a power play by Batiatus in order to keep his loyalty. Crixus awakens from his wounds during the same fight which brought Spartacus stardom to find his status as champion of Capua stolen by Spartacus. Spartacus casts off his history as a Thracian, and forgets his dream of freedom, becoming content with life as champion. The turning point is when he is forced to kill his only friend in the ludus, Varro, when Ilithyia seduces the editor of an exhibition match in order to hurt Spartacus. While suffering from his wound in this match, he has fever dreams that lead him to discover Batiatus arranged Sura's death. Knowing that it is all or nothing when it comes to resistance of his enslavement, he resolves to "kill them all" and lead a revolt against the ruling house he once fought for. 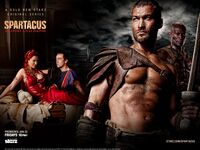 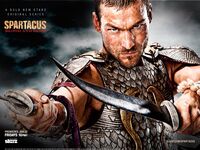 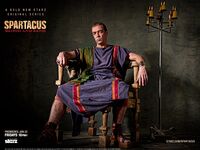 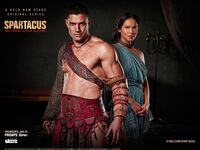 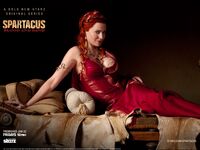 The premiere episode of the series set a record for Starz, with 553,000 viewers on their network, and another 460,000 on Encore, where the show was available only that weekend.[19] Critical reception of the first episode was varied; the review aggregate website Metacritic gave the show a score of 54 out of 100.[20] Ken Tucker of Entertainment Weekly gave it the grade B+, saying it "might prove to be the not-at-all-guilty pleasure of the season."[21] Barry Garron of the Hollywood Reporter suggested that with "such thin stories...it's small wonder that sex and violence are used to take up the slack."[22] Robert Lloyd of the Los Angeles Times wrote that John Hannah as Batiatus "keeps the show grounded with a persuasive portrait of a man engaged in a stressful daily business" and called Whitfield as Spartacus "handsome and buff and smart and beastly."[23]

The show opens with a disclaimer regarding the show's representation of the historical Roman society: "Spartacus depicts extreme sensuality, brutality and language that some viewers may find objectionable. The show is a historical portrayal of ancient Roman society and the intensity of the content is to suggest an authentic representation of that period." Producers Steven S. DeKnight and Robert Tapert have stated they use two historical consultants, with whom they exchanged scripts.[1]