Shadows of the Jackal

Shadows of the Jackal is issue two in the Devil's Due Spartacus comic book series. It was later turned into a motion-comic.

The Story is narrated by Arkadios after his defeat by Spartacus. He tells the story of how Spartacus, despite surviving his execution, won't win his freedom. Instead, he is to become a slave and hopefully join the Brotherhood under his Dominus, Quintus Lentulus Batiatus. He story then trails to the brothers who made Crixus a legend in the Arena.

As he dies, Arkadios thinks on the man who killed him, Spartacus, a Thrace solder who disgraced Rome. He knows that Spartacus will become a legend, a man who will take the Vengeance on those Arkadios never will. He recalls on how a Gladiator joins the brotherhood of his house, and that Spartacus will have to prove his worth by facing Crixus. Crixus is the Champion, and earned this fame by facing legendary opponents, the Decimus and Tiberius Gargan.

Abelia Gargan whilst alone is visited by The Jackal, rumoured to be a demon, a beast who was yet a man etc. The Jackal rapes her and she stabs him and continues to dismember him before burning its body. Unfortunately she cannot terminate the baby in case it belongs to her husband who is at war but she feels that the Jackal's child is within her. She dies in childbirth.

Characters in order of appearance[]

-Arkadios after being slain by Spartacus. 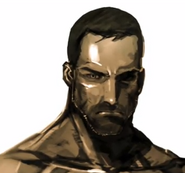 Spartacus as seen in Shadow of the Jackal