Seppia is the beautiful younger sister of Seppius, whose youthful innocent looks concealed a cunning and devious nature.

Seppia is a beautiful young woman with long, brunette hair, that is either done up or worn loose. Like other wealthy Roman women, she was always richly dressed and adorned with jewellery.

Unlike her brother, Seppia is more carefree, but shared his desire to have her way in all things. Though she might appear to be innocent and naive, in reality, she is spoiled, manipulative, and selfish. She also had no qualms over seducing Glaber and becoming his lover, despite his status as a married man. It was only after she discovered that Glaber was her brother's true murderer did her love for him turn into hatred, and she tried - unsuccessfully - to kill him.

Seppia's one redeeming feature might be that, unless she was pushed too far (such as the revelation of how her brother truly died), she was unable to bring herself to kill, and while she craved Spartacus' death, it was because he had killed her cousin, and her thinking was in accordance with the typical Roman belief that Spartacus must die for the rebellion to end.

She is introduced at gladiators, complaining about the rebels roaming about causing trouble. While Gallienus and Mercato state her brother Seppius and his mercenaries have it under control, she informs them of the death of a group killed earlier that day to their shock.

Although Seppia was originally insistent that she is much happier without a husband, she softens to the idea (so long as he's handsome and rich) and seeks Lucretia's counsel on the matter, and eventually reveals her husband of choice as the praetor Varinius. Ilithyia is noticeably troubled to hear this, as she had also wanted him, but remains silent until Seppia leaves, and gives Lucretia an earful.

Later the villa is host to another one of its famous pleasure feasts, with many Roman nobles in attendance. Both Seppia and Ilithyia seek out Varinius, with Seppia remaining by his side, making sure to giggle and caress him whenever possible. Seppius is much less impressed however, as is Ilithyia's husband Glaber. Seppia is no match for Ilithyia's determination, as she has been waiting for the right moment to show off. When Seppia is unable to kill Acer, one of Spartacus' men (who had been slowly tortured during the feast), Ilithyia quickly steps in and does it with ease.

Seppia leaves the party, embarrassed, at her brother's insistence, all the while revealing that Seppius has more than just a few perverted thoughts about his own sister, as he kisses her on the lips and invites her to return home and have "warm embrace", which she agrees too while crying.

After Spartacus manages to bring down the arena, killing many in the process including family friend Mercato, Seppia is invited to seek "grief consul" by Ilithyia and Lucretia. In reality, they are trying to persuade Seppia to sway her brother into joining Glaber. That night, she goes there and mourns Mercato and Cossutius before she quickly figures out their intentions to get her brother to side with Glaber and is amused by it. However, and says she won't be much use, but changes her mind as soon as Glaber arrives. He openly flirts with Seppia whose eyes linger on him, and she tells Ilithyia how lucky she is to have a man like him. Unbeknownst to Seppia, her entire household (slaves and all) is later murdered by Glaber, Ashur and his newly recruited men. Before crushing his neck, Glaber informs Seppius that his sister will be well cared for in his house - and in his arms.

Seppia tries to go to her uncle's villa in Pompeii but is invited to stay in Glaber's household, but is seen in mourning, seeking vengeance for the murder of her brother, although she believes Spartacus was ultimately responsible.

When Ilithyia leaves for Rome (after faking problems with the baby under Lucretia's guidance), Seppia immediately visits Glaber in his chambers, where the two stare at each other intently before Seppia takes off her gown. The two passionately kiss and proceed to have sex before their encounter is interrupted by Salvius.

With news that Ilithyia has gone missing, neither Seppia nor Glaber are upset, a reality shown when Glaber announces to Spartacus that, unlike himself, Spartacus loves his wife - a feeling he does not share with Ilithyia.

While Seppia makes herself quite comfortable basking in Glaber's affection, this leads to numerous sexual encounters between them. Very soon, Lucretia stumbles upon Seppius' snake armband among Ashur's box of stolen goods. The truth is finally revealed, as Seppia is obviously stunned at the news of sleeping with the man who killed her brother. To avoid his awareness of the fact, she stays at the ludus, but is forced to continue to have sex with the man who wounded her so deeply.

Using her growing hatred of Glaber against her, Lucretia and Ilithyia - who managed to walk back to the ludus after being released by Spartacus - convince Seppia to kill Glaber.

Unfortunately for her, the plan was rigged so that Ilithyia would arrive just in time to save Glaber from Seppia, who grabs the knife from her and stabs her in the chest before slitting her throat. As Seppia lies dead in the bath, Ilithyia and Glaber then rekindle their romance and proceed to make love in front of her corpse which continues to float motionlessly in the water.

“I do not seek justice. I seek vengeance.”
―Seppia to Glaber.

"Is he not handsome and rich...and of means!"

"Would that she had more than one life to take"

Seppia's introduction into the series. (Fugitivus)

Seppia in the market when Lucretia is revealed alive to the people. (Fugitivus)

Meeting Ilithyia and Lucretia in the market. (A Place in This World)

At the games. (The Greater Good)

Watching the games before Spartacus brings the arena down in flames. (Libertus)

Seppia, in her nightgown. (Sacramentum, Balance) 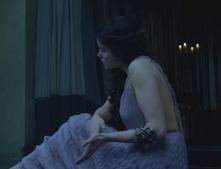