Spartacus Wiki
Register
Don't have an account?
Sign In
Advertisement
in: Characters, Gladiator, House of Batiatus,
and 19 more

Rabanus was a skilled gladiator for Batiatus and later a respected and dedicated rebel under Spartacus' command.

Rabanus is a Sardinian gladiator and rebel captain. He has tan or olive skin, as well as dark hair and eyes, common amongst many populations from the Mediterranean, such as his native Sardinia. He is of average height, has an impressive muscular build, and keeps his head shaved. Clean shaven in Blood and Sand, he later gains a stubble of a beard in Vengeance and War Of The Damned, and gains makeshift armor to protect himself. While he enjoys some more raucous activities like gambling and socializing, he appears to be relatively mild-mannered, level-headed, and responsible, often intervening in disputes between fellow gladiators and rebels.

Rabanus often trained as a gladiator in the style of hoplomachus, but is shown to have an exceptional grasp of many weapons and fighting styles. As a rebel he continues to use a spear and shield as his main weapons, but also displays skill in using a net, sword, battle axe, and hand-to-hand combat. Rabanus is easily among the most skilled warriors in the series, as seen from his position as a gladiator worthy fighting Crixus as the champion of Capua in the primus position, and from his many survived battles as a rebel. His frequent proximity to rebel leaders. as well as more diplomatic tendencies, implies he also holds some kind of leadership or authority position in the rebel army.

Rabanus is one of many gladiators in Batiatus' Ludus. Upon the arrival of Spartacus and Varro along with the rest of their recruitment class, he mocks them by shouting obsenities and treating them with contempt. When Doctore urinates on the sand pushes Spartacus' face into it in order to discipline him, Rabanus laughs but appears uncomfortable. He was later selected to battle Crixus in the primus of the games of the Vulcanalia after the injury of Gnaeus. However, wanting to rise quickly in the ranks in order to save his wife, Spartacus disrupts the primus announcement by shoving Rabanus out of the way to attack Crixus. Rabanus helps get Spartacus under control, and appears angry that the Thracian was able to manipulate himself into the primus.

He is often seen training with Crixus, as well as Barca and the Veteran. He can often bee seen spending time eating, socializing, playing dice, and drinking with the other gladiators. In particular, he appears to have close friendships with Varro, Pollux, Hamilcar, and Rhaskos.

Following Varro's death, Rabanus, along with Spartacus, Hamilcar, and Rhaskos, acted as pallbearer to Varro in carrying his body outside the ludus.

When Spartacus and Crixus began the revolt in the ludus, Rabanus took up arms and killed many Romans, soldiers and citizens alike. He was among the many gladiators who cornered Batiatus in the heart of the ludus, before Spartacus confronted and killed Batiatus.

Rabanus was then seen escaping the ludus to follow Spartacus in taking their vengeance upon Rome.

Rabanus, alongside many other gladiators, would escape with Spartacus following his revolt. When the rebels find refuge in the sewers beneath the city, Rabanus reserves himself to train the houseslaves alongside Donar and Peirastes.

Spartacus and Crixus move towards assaulting a brothel in Capua in order to discover the whereabouts of Naevia. Rabnus is one of many who take part in the assault and slays many Romans before regrouping with his comrades.

When Spartacus disappears to confront Glaber on his o

wn, Rabanus goes with Crixus, Agron and Donar in order to save him, killing many Romans in the process.

The group later takes a villa, south of Capua and use it as a small base of operations. Rabanus discovers and captures the villa's Dominus and brings him before Spartacus.

After Agron leaves the group to enter Vesuvius, Rabanus is among many of Spartacus' group to follow in Agron's wake.

He would later take part in the mission to rescue Crixus, Oenomaus, and Rhaskos from the arena in Capua. With the other rebels, he would set the arena on fire, causing it to collapse and kill many Romans.

Rabanus gets along with his new German friends and is normally seen having fun with them in the background and training them alongside Donar.

When Varinius sends Roman guards to attack the temple, Rabunus takes up arms in defense, killing many Romans before fleeing with the rest of the rebels.

On top of Vesuvius, Rabanus and many others bear witness to the death of Ashur at the hands of Naevia. He later helps make ropes to allow Spartacus, Crixus, Agron and Gannicus to climb down the mountain and flank the Romans. Rabanus would then take part in the assault down the mountain, led by Oenomaus, and fights valiantly alongside The Veteran in defeating several Roman soldiers to the point where the rebels see victory against Glaber and his forces.

War of the Damned[]

Rabanus remains a capable soldier in the rebel army in the months following their victories over Glaber, Varinius and many others.

During the opening battle with the legion of Cossinius, Rabanus is seen using a net in battle and showing increased skill that he is a rebel of great use to the army built by Spartacus.

When the rebels besiege the Roman city, Rabanus is one of the many who take part in the fighting. He slays many Romans and is even shown using his bare hands to beat many of them to death. After Crixus spurs the rebels into a frenzy to slaughter the surviving Romans, it is unknown if Rabanus takes part in the slaughter.

Rabanus would later become selected as part of a group with Spartacus, Sanus, Gannicus, Saxa and Lugo to leave the city and go overseas to the Roman coasts to steal food being led to Crassus and his army.

When the pirates betray the rebels and the Romans attack the city, Rabanus is one of the many to take part of the fighting. However, the rebels are forced to retreat into the mountains forcing Rabanus and the others to abandon the city.

Rabanus survives in the snowy mountains and escaped through Crassus' wall. He later fights off the soldiers sent by Crassus.

When Spartacus and Crixus eventually decide to take separate paths, Rabanus chooses instead to stay with Spartacus and take the path in order to escape the Republic and over the Alps.

When Crixus falls and Tiberius and his soldiers are captured, Spartacus holds tribute games in a make-shift arena to honor the fallen

with blood. Rabanus stands prominently near Spartacus as he is one of the chosen rebels to fight against the Romans in a series of matches, donning his old role as a gladiator but fighting in the style of Secutor. During a match, in which he is teamed up with both Pollux and Tyronius, Rabanus easily bests a Roman soldier. After the games end and Tiberius dies, Rabanus watches as the rebels honor Crixus with a burning pyre. As Spartacus and the rebels chant the names of the fallen, Rabanus himself calling out "Rhaskos".

When the rebels go to meet the army of Crassus for the final time, Rabanus joins his brothers and sisters in battle. Fighting valiantly, he slays many Romans, but is eventually defeated and captured by the soldiers.

Rabanus is last seen nailed to a cross on the Appian Way, across from Kore. 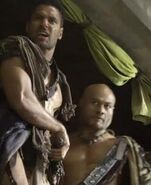 Rabanus as a Gladiator in Blood and Sand 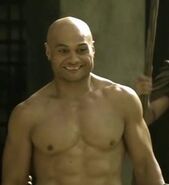