This unnamed character is a former slave sold to Ovidius for his intentions of killing Batiatus at the Pits. He's seen at the Pits drinking and watching the deadly fights as many other romans, but during the fight between Spartacus and Ixion, he and his comrade try to kill Batiatus, but they fail. The first is killed by Barca and the second is killed by Spartacus after he killed Ixion. 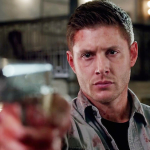