Edit
watch 01:32
She-Hulk Trailer Dropped - The Loop
Do you like this video?
Play Sound

Marcia is a prostitute in a brothel in Capua.

Marcia is a slave and prostitute serving in Capua. She is thin and has long curly black hair.

Marcia is kind and understands her place as a slave. Despite this, she has a secret longing for freedom and believes that perhaps the cause by Spartacus may be the better choice in life. Following her meeting with Gannicus, she sleeps with him, and they discussed the rebellion.

Marcia is the woman Gannicus sleeps with the night before he is to execute his fellow gladiators. After they are done, Marcia asks if she can share drink, which Gannicus pours, and asks him why he is in town. He explains that he comes for the games and, having never been, she says that she wishes she could have gone. Gannicus remarks that he wish that they could trade places, with her on the sands and him sleeping with women until the gods take him. Marcia then realizes who he is and is amazed, as she never met a slave who actually earned freedom.

She asks if she can see his Rudis and questions the markings which he explains they tell of his victories long past. Marcia notices the sad tone in Gannicus' voice and asks why he carries it if he is troubled by it, he replies it must always stay with him even in the arena to show he is not a slave and as reminder of the time he once was. He says he would fall to bed for the approaching games with the remembrance of her thighs keeping him warm. The two smile at each other before Gannicus leaves.

She briefly appears bartering with two men who wish to buy her, she tells them she's a whore not a fool. She soon witnesses a fight occur with two customers that ends with Ashur recruiting Abrax into his new group of killers.

Gannicus returns to the city looking for payment, although because he did not complete his job of executing Crixus, Rhaskos and Oenomaus, he only gets a small sum of money. He finds Marcia in the brothel later, although he tells her he does not have enough money to buy her. She coyly responds, and Gannicus asks her to come with him when he leaves the city. Marcia says that she has been thinking of leaving to join Spartacus' rebellion, and that she is not alone in these thoughts. They are interrupted by Ashur, who tells him that Glaber wishes to speak with him.

Gannicus finds Marcia later, strung up and crucified among other slaves in the marketplace, by the work of the mercenaries on orders of Glaber, who ordered to execute every slave who even mentions Spartacus. It seems that Ashur overheard Marcia and Gannicus talking about Spartacus. Gannicus was very saddened by her death, which was one of the factors in pushing him to become a rebel. 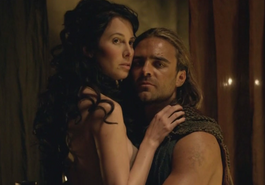 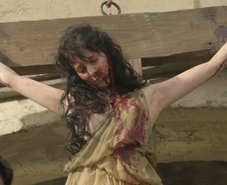 As Gannicus finds her - crucified.