The Amphitheater of Capua or, The Arena, is the host to all the gladiatorial games of the city. It also serves as an execution ground. The arena was funded by the Roman nobleman Tullius.

The arena played a major part in the first season, being one of only two places most gladiator slaves can go.

The arena's construction was overseen and funded by Tullius, one of Capua's elite, who was later murdered by Quintus Lentulus Batiatus and his body bricked up within the very walls of the arena the night before the grand opening.

The final battle of that evening was a battle royale' between the houses of Batiatus and Solonius. This was to decide the next champion. It is in this battle that Ashur injures his leg (removing him from the arena for good) and Gannicus wins both the role as champion and his freedom.

The arena was also where Spartacus was sentenced to be executed. Rather than allow himself to die, he faces and kills Arkadios and three other gladiators. It is this action that causes Batiatus to add Spartacus to his house.

Later Spartacus would lose his fame when he faced and was overpowered by Crixus. However, Spartacus is spared by Batiatus (at a great expense of pride).

Spartacus, no longer having favor of the crowds, spent very little time (if any) in the arena until he was paired with Crixus to face Theokoles, the Shadow of Death (as only one gladiator would not be enough). This battle was prepared in hopes of it pleasing the gods and ending the drought. While it was believed by all that Spartacus and Crixus had won the battle when Theokoles fell to the ground, their "victory" was short lived when Theokoles got on his feet and continued the battle. The two gladiators, flustered in their joint effort, were now, no longer able to synchronize their attacks and were overwhelmed. They were unable to recover and Crixus was injured (this was the first time Crixus lost a battle in the arena). Before Theokoles was able to finish Crixus, Spartacus is able to step in and take over. He used the injured Crixus's shield as a ramp to propel himself at the 'Shadow of Death'. While they fight, Crixus used his helmet to create a glare,

blinding Theokoles. Spartacus took this moment to kill him and take the role as champion.

After this Spartacus (who now changed from sword and shield, to double swords) took to the new role very well, he hoped to use it as a means to see his wife again. This however did not last, his wife, Sura, who was rewarded to him for his victory, was killed. He mourned her death greatly.

Spartacus was barley given time to mourn the death of his wife, Sura, before he was told to fight again. While Spartacus grieves her death, Batiatus arranged his next fight, representing a Roman's conquest over the Thracians. Spartacus is to play the Roman leader and will slaughter criminals dressed as Thracians. At first he refused to fight as it is against his heritage. To make things worse, Spartacus attracts the rage of Batiatus when, in a fit of anger, he murders Gnaeus, a fellow gladiator, for abuses against Pietros. Batiatus warns him that if he wants to remain Champion of Capua, he needs to revove himself of his Thracian past and become a true gladiator. Spartacus is hesitant, but remembers his wife in a flashback, where she told him to put his fate in the hands of the gods. He heeds Batiatus and in the end, agrees to fight as a Roman. He is set against six criminals who, whilst at first overpowering him, eventually all reached their end. When the sixth is on his knees, Spartacus hesitated in killing him because he sees his own face on the criminal's. He eventually decapitates the man, signifying the death of all the Thracian that was left in him and embraced of the life of a gladiator.

Not long after this, Spartacus cuts his ties as a slave and leads the revolt and escapes with his fellow slaves. This was the start of the slave rebellion

For the few months, the arena is used as a way to keep the people happy and forgetful of the slave rebellion. This only helped when the attacks were further away from the city and away from mind.

Spartacus returns to the arena several months after the start of the rebellion in an attempt to save Rhaskos, Crixus, and Oenomaus. Their plan was to have Spartacus and Agron dress up as guards and wait on the sands near the doors while Mira, Donar and several other rebels pour pitch on the beams holding up the arena and set them on fire. The plan is delayed due to the beams not burning at the needed speed. While Mira tries to dislodge the beams, Agron pleads with Spartacus to skip the first part of the plan and jump in and save their friends. Rhaskos is killed moments before the beams give way and a part of the stands collapse. As soon as this happens people panic and attempt to escape, this is the cue for Spartacus and Agron to save the rest of their friends. As they kill the rest of the executioners and get ready to escape, Spartacus attempts to kill Glaber. He picks up a spear and throws it, but instead misses, hits, and kills Cossutius. Glaber escapes leaving the rebels to pick up and leave the now burning arena. The fire takes the lives of hundreds of citizens, as well as senator Albinius (who was really murdered by Glaber). 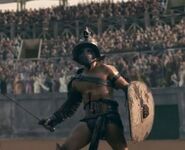 Two Gladiators fighting in the Arena.

Spartacus in the Arena.