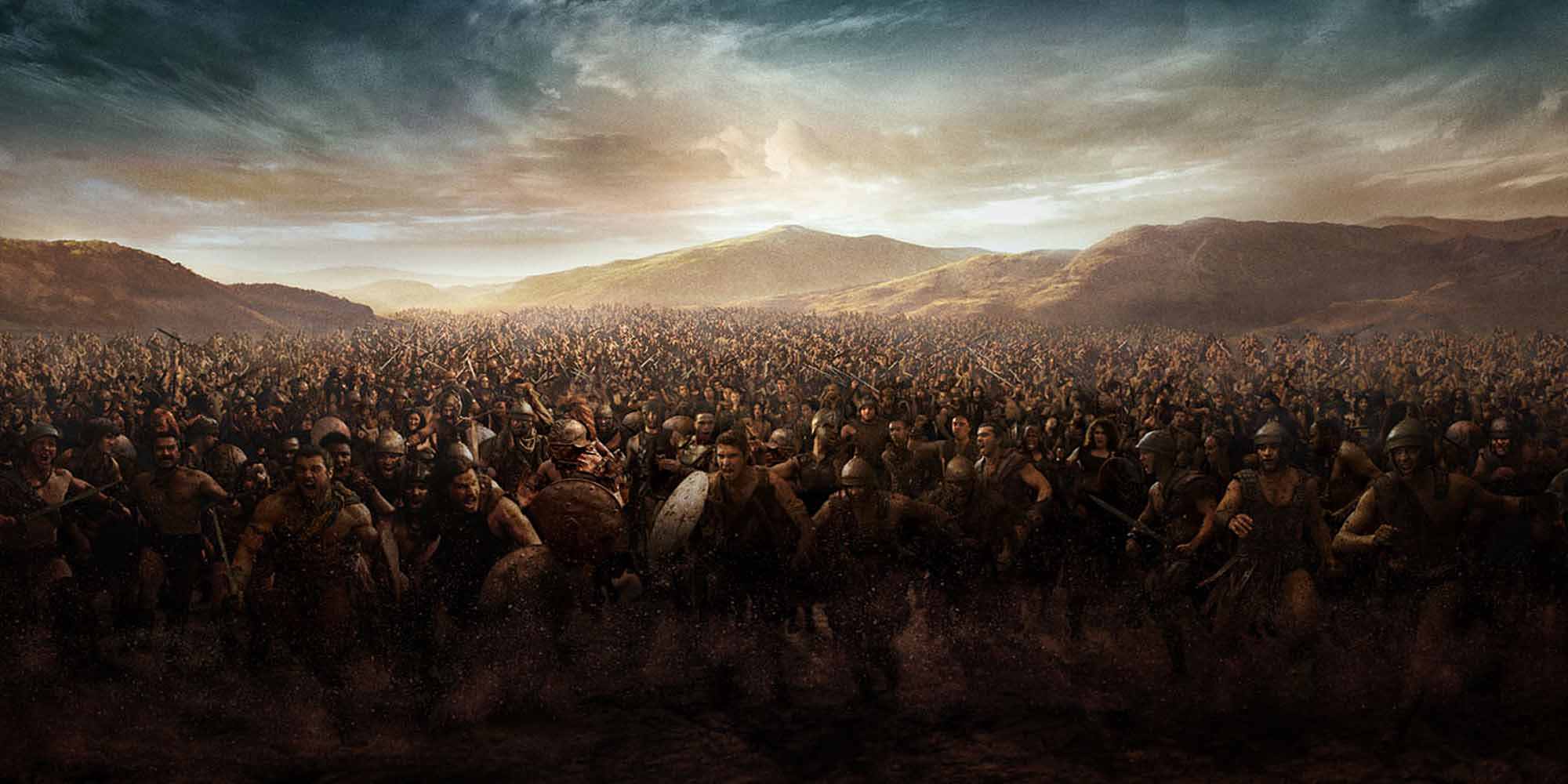 If gannicus wanst such an alcoholic hed be #1 over spartacus where he sits at #2 (out of the crew season 2 on). theokoles one on one would ruin anyone though. that was supposed to be implied in his dight against spartacus and crixus. Dudes basically a super human and they had to pull some tricks to beat him. But onomeous i want to rank higher than 3 cause ge had moments that showed how insane he is in a fight even against spartacus and crixus but he was never really consist in the show enough. And crixus at 4. Hes my favorite character actually but spartacus (only later season 1) and gannicus would beat him one on one

(edited by A Fandom user)
1

Egyptian only got the upper hamd on onomeous because he had one good eye and he was also still wounded from the arena collapse. Egyptian was sick along with the rest of ashers mercs but he couldnt stand up to healthy spartacus, gannicus, crixus, or onomeous on even ground. No chance

3. Spartacus (as a warrior just ahead of Gannicus due to superior skill with a spear)

5. Caburus - don't forget he was dominating Gannicus and was casually beating a proven gladiator in Crixus. Crixus casually beat Barca in sparring matches in the latter half of GotA, so he was proven, at least).

Now, hand to hand, this would be a very different story because Gannicus and Oenomaus are very good at fighting unarmed. Crixus and Spartacus were fighting relatively equally in their fist fight in Melia Ridge, Spartacus getting an upper hand, however. Theokoles and Caburus have a huge size advantage though, but Theokoles is still the biggest and strongest character on the show (Sedullus is technically smaller in the lore, but Conan Stevens is 3 inches taller than Reuben De Jong).

People are so bias , its ridiculous... Spartacus not only has better feats than anyone , but was a soldier before gladiator, by the end of the show he is far far above anyone else , he handled crassus and his personal crew of about 15 soldiers and did not die right away after beig speared in the back(showing great endurance) , Spartacus was also smarter than any other gladiator in battle and against theokoles , he would have one shotted him(if theokoles allowed spartacus to attack first(toying with opponent) spartacus would end that fight quick) ,Spartacus was the only one that owned the egyptian , where others failed and oenomaus was NOT injured by the time he fought the egyptian , if he was injured , then why is it he killed off plenty roman soldiers and beat agron and crixus in that match organized by spartacus? Oh so when someone actually beats him hes bsck injured? Give me a break you idiots.. also the episode where he tries to help spartacus in a mission and spartacus turns him down as he recognizes oenomaous is still not ok " you have not yet healed ordela from arena",some episodes later(afro mentioned match organized by Spartacus, eps 9) he is seen no more bandages and ready to go. Spartacus Gannicus Egyptian Oenomaus Crixus

Gannicus did admit that he thought he was equal to Spartacus with the sword but that Spartacus was far superior with throwing the spear. Besides that we don’t know exactly where are the other gladiators fit in… But they all seem to be very similar in talent/skill… But Danica’s has that psychological confidence and shit. Plus the spear throwing talent.

Oenomaus! He was the only person to ever fight Theokeles 1-on-1 and live, and his training helped Spartacus and Crixus survive against him. The only time we know he ever lost lost a fight is when he was against Theokeles and after he had been tortured, starved, and injured. His skill and training made great warriors like Crixus and Spartacus, and he himself was a highly talented fighter with an affinity for all weapons and fighting styles. I personally think he was the best we ever saw.

After him I think it's

The rebel woman with the long black hair who we see in the background a lot in WoTD and goes with Crixus, Naevia, and Agron when they branch off

Crassus (as much as I hate to admit it XP)

Also, considering that the Veteran is like an old man and yet he lived through the entire war and several years of being a gladiator, I imagine he's an excellent warrior as well, but we don't see him fighting much. Same with Leviticus, Litaviccus, and Lydon. Rabanus and Ortius were gladiators for a long time as well, and they lived through most of the war (Rabanus right up to the very end, if we know for sure that's him on the cross in that one shot).

"Oenomaus! He was the only person to ever fight Theokeles 1-on-1 and live, and his training helped Spartacus and Crixus survive against him. The only time we know he ever lost lost a fight is when he was against Theokeles and after he had been tortured, starved, and injured. His skill and training made great warriors like Crixus and Spartacus, and he himself was a highly talented fighter with an affinity for all weapons and fighting styles. I personally think he was the best we ever saw."

As mentioned by oenomaus, he was toyed with, theokoles played with him for the crowd and then finally he finished oenomaus, when oenomaus thinks he has a chance " he struck me where I thought I was invicible" he was NOT in his prime here! Oenomaus was in his prime in blood and sand, he was a wise teacher and the only one beating crixus in the first 5 episodes of blood and sand, he offered to fight theokoles, instead of spartacus, he knew that he would win this time, he knows Theokeles and how he fights and thats why he is confident to offer to batiatus.

Also theokoles isn't the best, and thats also according to your list as well, so that contradicts things. Spartacus was landing clear shots on theokoles AFTER theokoles started taking him and crixus serious, spartacus was a low level gladiator in skill yet he was landing clear shots, and that includes crixus NOT helping since he refused to fight as one, just toward the end when he flashed theokoles in the eyes, then he recovered and came after spartacus and gets countered and finished, . Spartacus was just fresh out of the pits where the lowest of the lowest skill fighters fight, and yet he kills theokoles. Spartacus later in the series would promptly finish theokoles, for theokoles was just a big brute with size, he would try and toy with Spartacus(prime) and get finished.

Oenomaus got finished by the Egyptian because the latter was just a better fighter, he outmatched crixus with such ease, he was toying with crixus.

The Egyptian was kept in a hole in the ground he was so dangerous, he has marks on his body indicating his kills, could have surely been great feats against worthy opponents, he fought off all 4 and absolutely owned 3 of them with ease, he fought crixus and won, he fought oneomaus and won, he fought gannicus AND oenomaus, he owned gannicus who was saved by oenomaus, who gets a couple of shots in where SPARTACUS injured the Egyptian, but (oenomaus)ultimately gets killed by the Egyptian, he clearly showed to be a deadly in skill fighter to them and he was, but to Spartacus he was just another fighter he was going to win against, with ease and ONE sword he injured the Egyptian and almost killed him, if not for the romans coming to help, spartacus was starved, as mentioned in the episode that they were low on food, and the Egyptian had actually been fed and ready to go, this easily and clearly shows who is the series best fighter.

Also oenomaus was recovered by when he first meets the Egyptian, episodes earlier showed him with bandages and a quote from spartacus " you have not healed in ordeal in the arena", then later episodes he is seen without the bandages and spartacus has oenomaus fight side to side by gannicus and you can see oenomaus tossing agron aside, agron is just below crixus as shown, and he was a beast, and oenomaus also finishing off crixus and many, many other romans of the final fight, and even with one eye, " a man is never to weak or wounded to fight" he was slaughtering romans, the Egyptian beat him because he was a faster and better fighter, the first time they fought at the Greek temple, they were trading shots and eventually the Egyptian got him.

Spartacus was the best fighter, this is shown by feats and he never loses a fight after the one with crixus, where he foolishly set himself up to fight a champion crixus when he was a novice gladiator, he only gets better and this is shown, spartacus was a warrior ever since he was a boy, already a soldier with skills, he then started taking the gladiator thing serious and is seen in bed thinking about his recent victories, those are all primus fights, they represent best of the best vs best of the best, and spartacus was shown to win some of them easily, he rose to the top the quickest any gladiator, seen in the show, he also casuals cuts heads off when in the air, a quote from crixus " detaching a man's head from his body is difficult", and this is on your FEET as he means, as he describes it. Spartacus had a statue made from batiatus in a room where all the statues of former champions of the house of batiatus from his father and grandfather, where was oenomaus 's ? Where was crixus's? Can one be seen for gannicus? No. A direct statement from a lanista that had proved his father wrong ,who LOVED the lanista life and took it serious, about gannicus and crixus about them being worthy, mostly with crixus, who beats auctus. " you stand above ALL" Batiatus to Spartacus.

What do you think?